Warning of "curse" and the good news of Jesus

My 10-year-old said to me the other day that the last word in the Old Testament is "curse" (NRSV). He said, "Daddy, this is really bad, isn't it?" This got me thinking.

The last word in the Old Testament (Malachi 4:6; Hebrew: חרם ) refers to the things that are set apart to Yahweh for total destruction. It is used in Joshua 6:17, 18; 7:1, 11, 12,13, 15; 22:20 to refer to the total destruction of what has been set apart for God after victory in certain battles. I tend to think the word does not mean extermination, but that it is a fairly common ancient literary device to refer to the wiping out of enemy. (See here for further information.)

What is interesting to me is what Malachi is trying to say. Yahweh warns Israel to be faithful to him, so as to avoid their total destruction. And Malachi says that God will send the prophet Elijah to issue this warning. A similar warning is found earlier in Malachi 3:1, which says that Yahweh will send his messenger to prepare the way. Again, the message seems to be concerning the need for Israel to be faithful to the covenant (Mal 2:17-3:5).

This is where it gets really interesting. It is because Mark begins his Gospel by citing Malachi 3:1 in Mark 1:2-3 (which is in fact a composite citation of Mal 3:1 and Isa 40:3). Mark uses the Scripture to say that John the Baptist is the one who prepares the way for Jesus the Messiah (the Anointed King), who is the Elijah-figure that Israel is waiting for (Mk 9:11-13).

What follows in Mark's Gospel is of course that Jesus will fulfil his role as the Anointed King in the most surprising way. That is, he will suffer, die and be raised from the dead. And he calls his followers to follow the same cruciform life.

If we read the gospel of Jesus in light of the message of Malachi, then it is "good news" indeed. The "curse" of utter destruction for covenantal unfaithfulness is totally turned around. Those who responds to Jesus' call are participants of this good news. Those who resolve to reorient their lives according to that call and embody the value system of God's kingdom will find that their God is faithful and will not abandon his people.

Yes, the Old Testament ends with a warning, but not without a promise of God's deliverance. This promise finds its fulfilment in Jesus. It came with great price though, for the Son of God suffered and died - and was raised. He showed us the way of God. We can indeed rejoice in the promise of the good news of Jesus, and we are called to follow his way of life.
Posted by SF at 11:03 AM 1 comment:

Labels: gospel, Joshua, Mark's Gospel, Use of the OT and the NT

An article by Professor Walter Brueggemann on Joshua in Interpretation

For those who enjoy the more technical and academic engagement with the Scripture, there is a new article in Interpretation written by Professor Walter Brueggemann on the Book of Joshua. Click here for the article.
Posted by SF at 11:02 AM No comments:

A good description of a non-Christian religious tradition

Here is a link a good description of Chinese religious traditions.  Click here.


Teachings of Confucius
Heaven and the Divine
Early Chinese writings refer to a supreme or highest god, named Heaven or Heavenly Emperor. Confucius shared this belief, saying: “He who offends against Heaven has no one to whom he can pray.” Heaven presided with moral law. Later followers regarded heaven as the divine moral power of the cosmos, expressed perfectly in harmony with humanity.

Some Basic Daoist Ideas
Daoism also rejects competition, rank, luxury, vulgarity and boasting. Laozi said that the highest level was the least secure. Everyone wants to be at the top of the tree, but were we to achieve that, the tree would break. Instead, we should be like water, always seeking the lowest level.

Ancestor Veneration
Ancient belief included the veneration of ancestors. Souls reached happiness according to the conduct of their living descendants. Therefore one’s duty was to live a good and virtuous life. Ancestor worship is still practised. For many people it is simply superstition; something that is done “just in case.” For others it is more important. In many houses a small shrine can be found, usually photos of grandparents to which food and cigarettes are offered. The yearly qing ming festival celebrates ancestors with grave cleaning and firecrackers. Christians are taught not to venerate ancestors but this can be a source of family tension, even a barrier to belief.

Recently I read three little books on Paul, the resurrection, Genesis and Revelation. They are really good. I recommend them to pastors, theological students, and any Christian who wants to think deeper about what they believe in.

Michael Gorman's Reading Paul. Here is the description of the book from the publisher.


In this new introduction to the Apostle Paul and his gospel, written especially for lay readers, for beginning students, and for those unsure about what to make of Paul, Michael J. Gorman takes the apostle seriously, as someone who speaks for God and to us. After an overview not only of Paul's radical transformation from persecutor to proclaimer but also of his letter-writing in the context of Paul's new mission, Reading Paul explores the central themes of the apostle's gospel: Gorman places special emphasis on the theopolitical character of Paul's gospel and on the themes of cross and resurrection, multiculturalism in the church, and peacemaking and nonviolence as the way of Christ according to Paul. Gorman also offers a distinctive interpretation of justification by faith as participation in Christ—an interpretation that challenges standard approaches to these Pauline themes. Reading Paul demonstrates that the apostle of faith, hope, and love speaks not only to our deepest spiritual needs but also to the challenging times in which we live.

Michael Pahl's From Resurrection to New Creation. Here is the description from the author's website.


What is Christianity really all about? Is it - in its essence - about proper religious rituals, or correct religious beliefs, or acceptable moral behavior? What is at the heart of an authentic Christian faith and life?

From Resurrection to New Creation provides an introduction to Christian theology which attempts to answer these questions, proposing that the heart of Christianity is not a set of rituals or beliefs or behaviors, but an event - the resurrection of the crucified Jesus from the dead - that prompts a story - the gospel or "good news" of salvation through Jesus. Jesus' resurrection, the book claims, is the starting place and the compass in the journey of Christian theology, our journey to understand God, God's work in the world, and how we should live out God's purposes for humanity. Thus, beginning with Jesus' resurrection and using this event as a guide, From Resurrection to New Creation surveys the terrain of classic Christian belief and practice. The Trinity, the identity of Jesus, the work of the Holy Spirit, the nature of humanity, Christ's atonement for sin, salvation and the gospel, baptism and the Eucharist, the church and the future state - all these landscapes and more are explored in this concise introductory survey of essential Christian theology.

Michael Pahl's The Beginning and the End. Here is the description from the author's website.


Have you ever wondered if there might be more to Genesis than fodder for anti-evolutionism? Or have you ever thought, "Revelation has to be more than simply a roadmap for the future of the Middle East"? You're not alone.

In The Beginning and the End Michael Pahl surveys the opening chapters of Genesis and the concluding chapters of Revelation, taking seriously both their historical and literary features as ancient texts and their theological purposes as inspired Scripture. The result is a reading of the first and last books of the Bible that sketches out, from beginning to end, a story of God, humanity, and all creation—a grand narrative in which we are placed in the middle, and which calls us to live in a particular way as our identity and our values are shaped in light of our origins and our destiny.

Something from Michael Bird's book on Paul 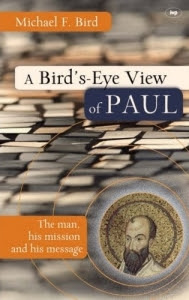 I have read the Bible from cover to cover many times, and I have to admit that I cannot easy detect the notion of imputed righteousness in the texts.  I cannot, for example, recall the words "imputation" and "imputed" in the Scripture (or have I missed them?). I have therefore referred to Michael Bird's A Bird's-Eye View of Paul for help. Here is what he says on pages 96-98.


But what about the imputation of Christ’s righteousness as the basis of justification? That is the notion that God imputes the obedience and merits of Jesus to believers and in turn imputes their sins to Jesus on the cross. Well, the fact of the matter is that we cannot proof-text imputation. If we think we can cite 2 Corinthians 5:21, Romans 4:1-5, 1 Corinthians 1:30 or Philippians 3:6-9 and find the entire package of the imputation of Christ’s active obedience and the imputation of our sin to Christ embedded in all these texts, we are sadly mistaken. These texts all come close to saying something like that, but fall short of doing so…
The imputation of Christ’s righteousness is a necessary and logical inference to make, as it allows us coherently to hold together a number of ideas and concepts in Paul’s story of salvation. Although no text explicitly says that Christ’s righteousness is imputed to believers, nonetheless, without some kind of theology of imputation a lot of what Paul says about justification does not make sense. Imputation is a synthetic way of holding together a number of themes that clearly point in the direction of imputation, or something very much akin to it…
Taken together, the language of ‘reckoning’, the emphasis on Christ’s obedience and faithfulness, the representative nature of Adam and Christ, the references to union with Christ, the fact that righteousness is explicitly called a ‘gift’ and the forensic nature of righteousness all make sense with some kind of theology of imputation. The mistake comes when scholars, even well-intentioned ones, try to read the entire package back into certain texts of Paul’s letters – it just does not come out that way. I concur with Leon Morris, who said that imputation is a corollary of the identification of the believer with Christ. (Here Bird refers to Leon Morris, The Apostolic Preaching of the Cross, 3rd edition [Grand Rapids: Eerdmans, 2984], p. 282.)

ETHOS has just published my latest article, entitled "Reflections on Power and Powerlessness".

This is the description the editor inserted.


[The article] follows up on Andrew Sloane's lecture 'Justifying Advocacy' with reflections on the biblical notion of power, especially in relation to the paradox of power in weakness.

Click here for the article.
Posted by SF at 4:44 PM No comments:

Labels: poverty, power, power in weakness, Scripture, social injustice
Newer Posts Older Posts Home
Subscribe to: Posts (Atom)
This is what the LORD says: "Let not the wise boast of their wisdom or the strong boast of their strength or the rich boast of their riches, but let those who boast boast about this: that they understand and know me, that I am the LORD, who exercises kindness, justice and righteousness on earth, for in these I delight," declares the LORD." (Jeremiah 9:23-24)

What does JACOB stand for?

SF
I hope this blog can be a resource for Christ-followers, who love the Lord and the Bible, who want to proclaim Christ's death and resurrection with a passion and want to embody the values of God's kingdom here on earth. This blog is especially dedicated to the poor and powerless. May God's restorative justice be proclaimed in this out-of-joint world.

Some articles I have written (including co-authored ones)