Tom Wright has the following to say about "sin" (in Romans 5:12-2) in The New Interpreter's Bible Volume X.

"Part of the problem, of course, is that traditional Christianity has frequently operated with a truncated view of sin, limiting it to personal, and particularly sexual, immorality. These things matter enormously, of course, but there are other dimensions, of which the last century has seen so many examples, which are often untouched by traditional preaching. Equally, those preachers who have focused attention on structural evil within our world, on systematic and politically enshrined injustice, have often left the home base of Pauline theology in order to do so, not realising that there were resources there from which to launch not only critique but also promise and hope. This passage [Romans 5:12-21] invites us to explore a reintegrated view of sin and death, rebellion and consequent dehumanization, as the major problem of humankind, and thereby to offer diagnoses of our world's ills that go to the roots of the problem and prepare the way for the cure." (page 532) 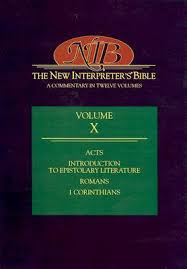 Newer Post Older Post Home
Subscribe to: Post Comments (Atom)
This is what the LORD says: "Let not the wise boast of their wisdom or the strong boast of their strength or the rich boast of their riches, but let those who boast boast about this: that they understand and know me, that I am the LORD, who exercises kindness, justice and righteousness on earth, for in these I delight," declares the LORD." (Jeremiah 9:23-24)

What does JACOB stand for?

SF
I hope this blog can be a resource for Christ-followers, who love the Lord and the Bible, who want to proclaim Christ's death and resurrection with a passion and want to embody the values of God's kingdom here on earth. This blog is especially dedicated to the poor and powerless. May God's restorative justice be proclaimed in this out-of-joint world.

Some articles I have written (including co-authored ones)